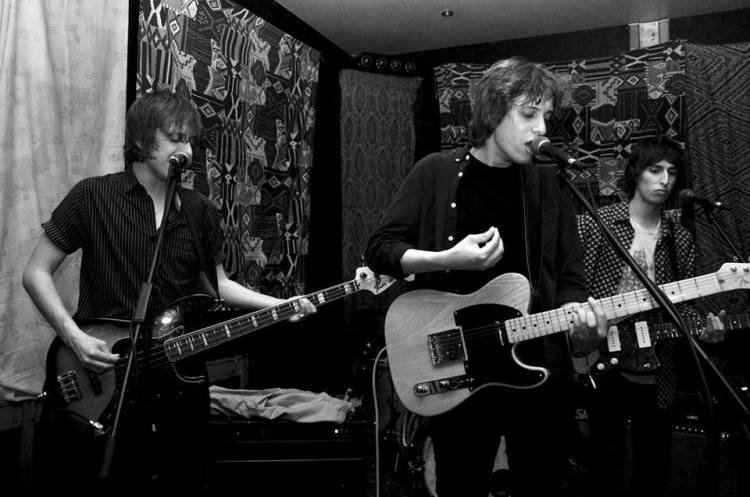 I started hearing whispers of Veludo Planes from across the pond a few months ago and couldn’t help but fall prey to the old NME tendency of relating the boys aesthetic to The Strokes. Intrigued – I wanted to see what made the boys tick, so I shot over a few questions for lead singer Christian to answer. Here’s an introduction to Veludo Planes and now that you’ll have met, I hope you consider that introduction a door into the world of their music and that of many bands in and around Portsmouth.

For those who don’t know the band – is there a story behind the name or did it just have a nice ring to it?

We were originally called The Planes, however we took a break from music while we were all at University, and when we came back to it, we felt we had outgrown the name. However, we felt we had to keep a part of the old name with the new music, and new image. Veludo was just a cool word.

How did Southsea affect your sound? Is there a big music scene around there?

The music scene around Southsea is an odd one. Whilst there is great talent here, there isn’t much of a collective scene. There are only a handful of venues, so it’s quite difficult to break out of, unless you really put the work in!

Have you guys (Mike and Chris) always played together – what’s it like to have a familial connection to a bandmate?

I think we first started playing together around the age of 8, so its been quite a journey! It’s great, when you know someone that well, you can react instinctively to what they’re playing and visa versa!

What have you found to be the hardest part of making a name for yourself in the British scene?

I think in Britain, there can be quite an emphasis on what you’ve done previously. It’s like to need to earn peoples respect. Turning up to a venue as a new band, does not mean the audience will like you, or respect your music. You really need to work hard to win them over. However, I feel like this is a great test for bands, it makes you confident in your music, and you learn how to put on a live show.

What is Portsmouth’s scene like? Is there a big uni crowd invested in gigs and artists there?

In a word. No. There is a large uni in Portsmouth, however for the most part the university makes very little effort to promote the local scene. There are some students that are really into at student radio, however it is the exception not the rule.

Your new song ‘Luna’ is a big one – what was the mindset when you sat down to write it?

We had been trying to experiment with new song structures and production ideas for a couple of weeks and nothing was working. All of a sudden we stumbled on the riff, and the song really wrote itself from there!

I saw that you guys followed a lot of DJs on Soundcloud – is that massive sound and huge movement in the audience something that you think about when you make the indie rock you do?

Whilst we like electronic music, it’s not something we think about when we write. Chris also has his own soundcloud where he writes classical music, often collaborating over remixes with DJs. When we started Veludo Planes, many of those DJ’s followed his new project and we followed back.

What’re your biggest hopes for the band moving forward?

Our hopes have always been to write great songs and for people to hear them. Also it would be great to do some major UK festivals!

Did you gain any helpful advice from bands like Blossoms or Spring King after opening up for them – I love those guys, they were so lovely to talk to.

Just being around those bands and that higher level of proffesionalism is a huge inspiration. Both from a songwriting, stage production and performance level, as a new band, it opens your mind up to more ideas. I think supporting artists like Spring King and Blossoms are hugely important to new bands. It is the best experience you can get of real touring, and as a band it gives you a bench mark to aim for.

The emphasis on graft and playing ‘shit’ venues for a few years before developing a fan base of loyal kids who’ve been with you since the first dive bar, is something I find inherently woven into the fabric of the culture of British rock musicians I get to talk to – does that journey really resonate with you guys?

I think this is the way British bands have to do it. It’s a right of passage. However I would say all those shit venues, whilst being a little scummy around the edges, are usually always run by the really passionate music fans. Having the support of these venues is hugely important to getting your music out there and gaining a fan base. We have been put on amazing support shows, in areas where we don’t have a large fan base. The venues gave us these shows simply because they like our music and want to help us grow! Shitty venues are the bedrock of British rock music.

Was there a show or band growing up for any of you that made you think, “Fuck, I need to make people feel what I’m feeling right now”?

When we went to college (your last two years of high school) we were surrounded by music 24/7. I think this gave us the drive to go out there and see how far we could get as a band!

Are there any bands you think kids our age should be listening to if they aren’t already?

Our friends Kassassin Street are onto big things. They should get on them soon!